It has been 2 weeks. I know I should have done more than just post buttons on my sidebar, and thank people and pets individually, but I could not.
I would cry.
As there are so many people (and cats and dogs and bunnies) to Thank, I have split this into 2 posts.

First was the beautiful badge that Ann at Zoolaty made. 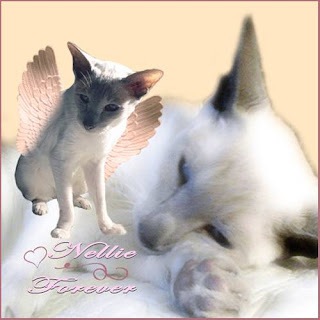 Ann does so very much for the pet blogosphere. She has done this since I started blogging in 2009 (She started in 2007!). She says she suffers from OCCDPSD (an acronym for obsessive compulsive cat dog photoshop disorder)...  Last spring, Nellie was the Campaign Manager for Smoke and Joe's run for the Presidency and Vice Presidency, and without her help and her spectacular graphics it would have been nowhere near as successful (or as fun!).
Ann ROCKS!

Next is the the Petcretary at Meezer's Mews and Freckles Woofs (Pipo, Minko and Mr Jack Freckle) made us a gorgeous card! 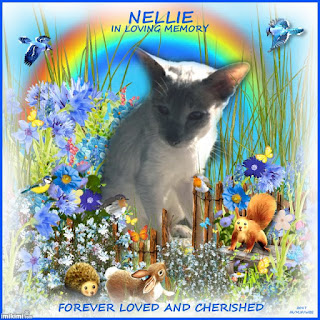 She also made and posted cards for Snowie and Humphrey at Bionic Basil's and for Dory at Dory's Back yard.  Nellie has "visited" them and we love them to bits. I always so look forward to their comments. They are always so much fon to read.

Then there is Speedy and his Mum! 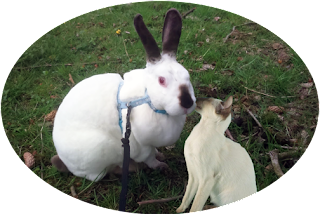 Speedy and Nellie had a wonderful (and long) cross species love affair. Since he first started blogging, Nellie and Speedy have been on dates, danced and gone pirating.  They visited back and forth and Nellie spent a lot of time with Speedy just before Easter. 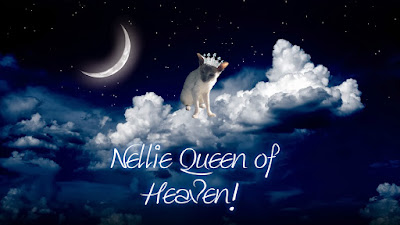 On this POST Nellie Queen of Heaven Speedy did a tribute to his grrl furrend!
(It still makes me weep).
Speedy (and Mom Rachel) I am so proud to have you as a friend.

Thank You Kali Shoko and Peeps!

Our fellow Canadians the Canadian Cats Meezers at Large - Kali and Shoko are great friends, as are their pawrents Jean and Bill. 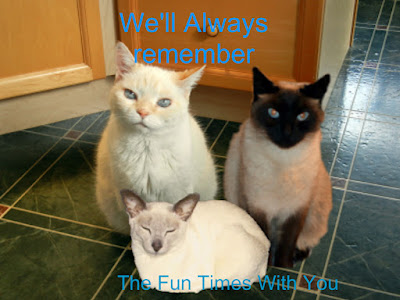 Besides being blogging buddies, they (Jean and Bill) have actually come to Nellie's Castle and visited with the Queen. As a matter of fact, they visited 2 days before Nellie went over the bridge and took Nellie's last picture.
Kali and Shoko wrote a lovely post of their visits with Nellie and the antics they got into. I always looked forward to collaborating with them. Jean has a wicked sense of humor and such brilliant ideas! I can't wait to visit them in Prince George!

Thank You Caren and Cody

Nellie's first blogging friend was Caren and Cody. They were one of the first pet blogs to post on the Cat From Hell and Cody and Nellie were best buddies. 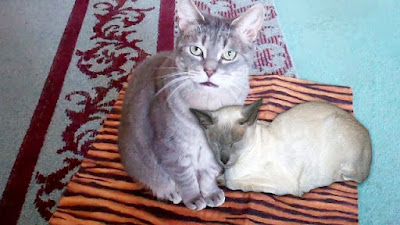 Cody was the FIRST for many things that Nellie did on her blog. He was the first she "visited", the first she danced with, the first place she went when she "ran away" when Jo Jo came to live with us and when she got sick and could not party this past New Year's Eve, she invited Cody over for a quiet "party" (OK he was her Cabana boy, decked out in a Lei...)
Caren's poignant post on April 16 so moved me, I could not write a response for a couple of days after. Every time I read the words and looked at the pictures, I cried, I still do....
Caren I send you virtual hugs and someday I hope, real ones.

I first discovered this blog when LadyBird was the Queen Bee! Nellie and Lady Bird had a few adventures. 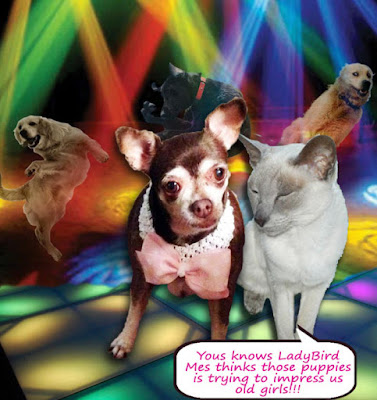 After Lady Bird went over the bridge, Toby and Nellie had great fun together.
They put together a wonderful tribute post and have a slideshow of their Memories with Nellie (as well as one of Sammy Kimmel too) on their sidebar.
They also sent this LOVELY graphic! 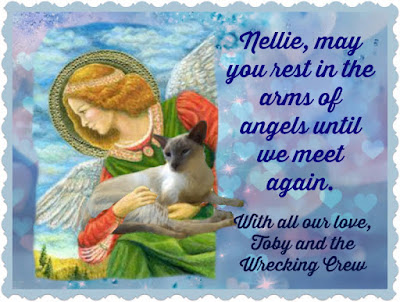 I am so honored to count Sabina as one of my blogging friends.